Okay, so earlier today I noticed some people who had recently purchased ArraySync directly from us (rather than the Mac App Store) were sending like 30+ activation requests which is way unusual. A quick check on my newly updated Mac system has shed some light on what’s going on.

ArraySync saves your authentication data inside a global folder located at /Library/Application Support/ArraySync. This has been standard practice for all Mac apps since Mac OS X first appeared over ten years ago. In fact, if you look in there now, you’ll see lots of Apple and third-party data stored there.

Until we can push out an update to fix this, which will probably be rolled up with all the other updates I keep telling you all about, there is a temporary solution. Simply go to your /Library/Application Support folder and inside there create a folder named “ArraySync”. This will magically get ArraySync activation working again on Lion until the bug is fixed. The screenshot below should help explain (the “AuthKey” file is created by ArraySync upon activation): 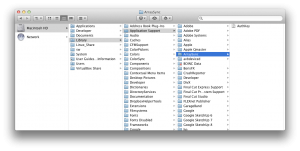 Feel free to ask any questions if this isn’t clear.